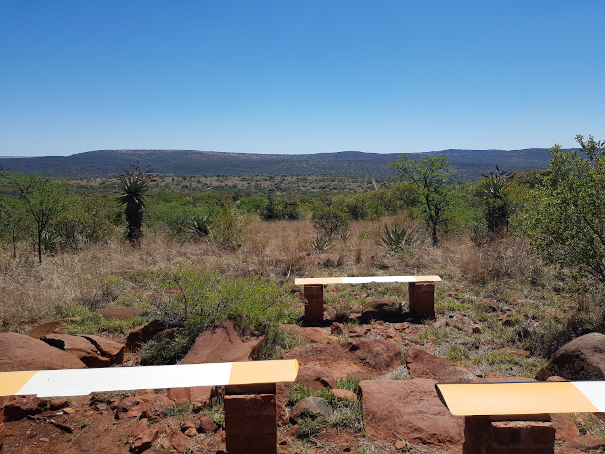 It was a cool, overcast morning when I drove to Grand Central airport to fetch my Cessna 182 RG after a service. I sat waiting until just after 9hoo, waiting for the clouds to lift so that I could fly to Kitty Hawk, east of Pretoria.

It was Wednesday, 27 April 2016, Freedom Day and thus a public holiday. The plan was to fly to Kitty Hawk, pick up my son and a friend, and fly them to Margate, where another friend's parents invited them to stay for a long weekend. I would then fly back alone - a nice flying outing on a public holiday.

I departed after the morning clouds lifted at Grand Central and flew via the “Pinedene route”, south of Waterkloof Airforce base to Kitty Hawk – a 15 minute flight. I flew over the Kitty Hawk runway, did a wind check and set up to approach from the south on runway 01. They say the first 5 hours after an aeroplane service is always risky.

As I was on finals, smoke came from the engine into the cockpit. So much so, that I had to open the window to let it out and be able to see the runway. I remembered two things – shut off valve and speed to kill the flames. Then I thought let me do a radio call, then land. And didn’t shut the fuel valve. All ended well, fortunately. I stopped, shut down and inspected – was some cable from the alternator that had an electric short somewhere and the housing started smoking. Fortunately no flames. I also remember seeing the aerodrome manager helping, very relaxed, to load luggage in another R44 helicopter, whilst I had my minor emergency.

The parents of my son’s friend were already there waiting and came closer (without really knowing what had just happened), and gave me a bottle of expensive red wine in advance for flying their son to Margate.

I realised I had to make a plan.

At the time, I had a young commercial helicopter pilot working for me on the farm – it was the height of the exotic game bubble and we had a deal to fly a veterinarian to dart game. The pilot is the one who asked me in his interview, when I asked him to do a “test” flight with me – “Did oom bring clean underpants?”, and the same one with his bright yellow fighter pilot helmet, that was dubbed “Bumble bee” by one of the farmers. Maybe also a sign of things to come.

I phoned him, and asked him to bring the R44 helicopter from the farm - that is the backup plan – so that I can fly the two boys with the R44 to Margate. He said he only landed once at Kitty Hawk before, and I briefly talked him through the approach. I then went and swept my hangar (something I almost never do), the two boys went off to the club house to eat a massive breakfast while waiting for their lift.

After about 1,5 hours I phoned Waterkloof tower and asked if RXD spoke to them, and they confirmed he just spoke to them on the radio, asking to use the Pinedene routing. I walked to where the taxiway from the fuel bay joined the runway, to direct him where to land.

It turned out to be a busy flying day – good weather and several aircraft in the circuit. As the R44 crossed overhead (which looked high at 1500 feet above), an old Dornier aeroplane took off on runway 01. I could see RXD losing height fast on downwind with a steep turn to the right to join a tight base leg.

There was a Bell helicopter just east of the runway, blades turning. It took off across the runway in a north westerly direction.

At that moment I saw, in the distance, on the final approach to Runway 01, a bit of commotion, but it was too far to make out what was happening. I then saw RXD flying closer, and the pilot landed next to the threshold, on the grass between the runway and the taxiway, about 600 metres from me. I was waving my arms and remember thinking “you idiot, you must come land here at the fuel bay.”

I then realised maybe something is not OK, and started running. As I approached the helicopter, the young pilot already shut the engine down, blades still turning, and he was literally on all fours on the grass vomiting from shock. I looked at the helicopter and saw the main rotor was damaged.

I looked up and saw the Kitty Hawk bakkie rushing to a plane that landed in the field just south east of Kitty hawk. Its tail was sticking up in the air.

For the first time it sank in what just happened. A mid-air crash between a plane and a helicopter, on the final approach to runway 01.

I walked the helicopter pilot to the clubhouse and some pilots fed him brandy and sugar water - in unknown ratios. I got a lift somewhere on the back of a bakkie and we drove to the plane. The pilot, an experienced, retired SAA captain, did well to land his Foxbat aeroplane in the rocky side of a flat hill - after a R44 main rotor blade went through the underside of the engine. The tip of the helicopter main rotor blade cut through his propellor and fuselage - not more than half a metre from his feet.

He said he felt the impact, saw a white helicopter sinking away to the left, realised they were dead, (as helicopters do not survive mid-air collisions according to him). He looked at the runway, realised he won’t make it, and landed to the east in the grass. He and his passenger climbed out without a scratch – the plane stood tail in the air on its propellor after striking a rock in the grass. Experience and a bit of luck saved their day.

All the logistics – CAA, plane and helicopter recovery, eager SAPS officers, etc. kept us busy for the rest of the day until sunset.

The father of my son’s friend arrived again somewhere, put his arm around my shoulder and said: “You had a shit day.” The mothers booked a flight with Mango to Durban for the boys the next morning, a bus to Margate, and their weekend was saved.

After talking to all involved, several times, what happened was slowly unfolding.

The helicopter pilot, sitting in the right seat of his helicopter, did a turn to the right after crossing the runway and flew a tight circuit. He couldn’t really see far to his left. The Bell helicopter that took off, asked if he can be accommodated, on which the R44 pilot confirmed on the radio he had him visual. But in allowing the Bell to take off, the R44 drifted over the aeroplane approach path to the runway – he normally would have approached on the taxiway or even to the east of that on the grass.

The Foxbat pilot, on a long final approach, pilot sitting in the left seat, didn’t see the R44 on its right and below him. He heard a helicopter pilot talking on the radio, but thought it was the Bell on the ground. Who said what on the radio, was not clear and will never be known as no recording was made. All we know now, with hindsight, is that not enough was said.

The Foxbat literally flew into the rotor disk of the R44 on its descent on final approach. The helicopter pilot said he felt something, thought it was a power line, realised he was too high – then looked at his RPM, but that was also fine, then the Cyclic started shaking. He kept his cool and landed the helicopter next to the threshold of runway 01 – entering an autorotation would have been risky.

It was indeed a shit day, with a Cessna with smoke in the cockpit being the smallest of the problems. The fact that all three persons did not have a scratch – the two in the Foxbat and the helicopter pilot – was amazing and a reflection of good pilot skills – and a large amount of luck.

We converted the helicopter main rotor blades into three benches, from where we view the sunset on our farm near Swartruggens. When the Foxbat pilot sat on it a year later, I asked him when was the last time he was that close to a R44 blade.

His answer was a short four letter word. 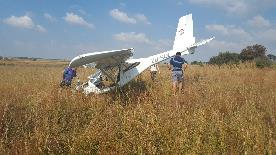